Our current Connecticut’s Kid Governor for 2020 is Myra Stanfield of West Hartford. 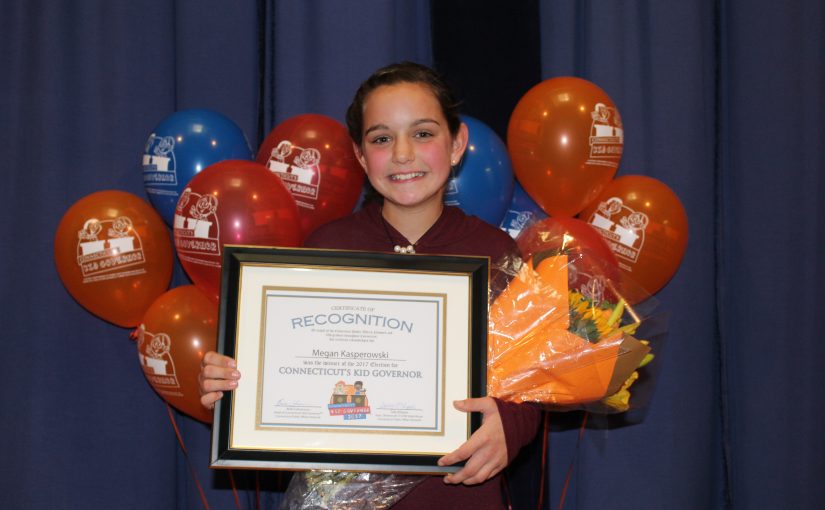 Portland, CT— On Tuesday, November 21, 2017, the Connecticut Public Affairs Network announced that fifth graders across the state had elected Megan Kasperowski of Portland as the 2018 Connecticut’s Kid Governor® (CTKG). The announcement came during a school-wide assembly at Brownstone Intermediate School where Megan is a fifth-grade student in Mr. Santavenere’s class. A breaking news segment featuring anchor Mark Zinni and Deputy Secretary of the State Scott Bates shared the election results with Brownstone Students and online viewers across the state. Classmates cheered and the Portland High School marching band played as Kid Governor-Elect Megan, who ran on a cancer awareness platform, thanked voters and fellow students for their help and support. You can watch Megan’s campaign video here. You can watch video of Tuesday morning’s announcement here.

“I can’t believe I made it this far!” exclaimed an excited Megan in her first address to her constituents during Tuesday’s assembly. “The reason that I chose cancer as my platform is because I feel that it is a huge issue in our community and that people are dying too often from this terrible disease. I want to help those suffering with cancer and make their days happier.”

“The Kid Governor program teaches students about civics and the power they have to make a difference in their communities,” remarked Brian Cofrancesco, Head of the Connecticut’s Kid Governor program for CPAN. “The fifth grade students have spoken and elected Megan to be their leader for 2018. She is passionate about making this world a better place and we are excited to work with her to mobilize students statewide to take action and raise awareness about cancer.”

More than 6,100 Connecticut fifth graders registered to vote in this year’s Statewide Election as students across the state were nominated by their classes to run for Connecticut’s Kid Governor. The award-winning statewide civics program, which is in its third year, was created by the Connecticut Public Affairs Network (CPAN) in order to teach students about elections, the importance of civic engagement and contributing to their communities. Candidates were required to submit a campaign video about a community issue important to them as well as a three-point plan designed to help other students take action on the issue. Seven final candidates moved on to the week-long election and their videos were posted to the CTKG webpage, CT.KidGovernor.org, for their peers to watch before casting their ballots.

The final seven candidates for Connecticut’s Kid Governor and their community issues were as follows:

Megan will begin her term as the 2018 Connecticut’s Kid Governor following her inauguration at Connecticut’s Old State House in early 2018. She will take part in CPAN public programs, raise awareness to help those fighting cancer, and encourage students across the state to take action on her platform. Megan will take over for the second and current Connecticut’s Kid Governor, Jessica Brocksom of Milford, who won in the 2016 CTKG Statewide Election on her platform of promoting the humane treatment of animals.

Recording of the announcement assembly at Brownstone Intermediate School.